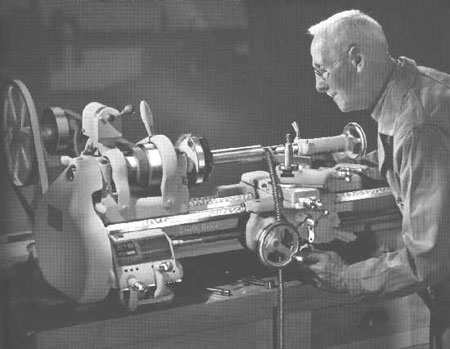 As early as 1914, South Bend Lathe™ manufactured standard industry 9 inch lathes.  In the early 20's, smaller lathes for students and apprentices were introduced, including a 9" Junior lathe, Catalog No. 22.  The hole through the spindle, horsepower, and other overall dimensions where the same as the Workshop model, and prices, in 1931, were around $300.

Model C lathes, which were manufactured for about four years before the introduction of the Model A and Model B, have independent change gear equipment, lead screw and half-nut power longitudinal feeds and hand cross feed.

Below is a list of South Bend 9 inch and 10K lathes still supported with replacement parts and parts list books.  The catalog number is a portion of the number located on the index plate on the gear box of the lathe. The code designation is included in the serial number, which is stamped between the flat- and v-ways on the tailstock end of the bed.